Moroccan ceramics is saturated with a conglomerate of different cultures, which with the passing of time have left their mark on the colours and patterns applied to porcelain. Romans, Vandals, Byzantine Greeks, together with their conquests, brought ways of production, colouring and design.  However, Islam, to which the indigenous people of Barber went in the 7th century, is the most noticeable and determined mainly motifs and shapes on tiles and plates. 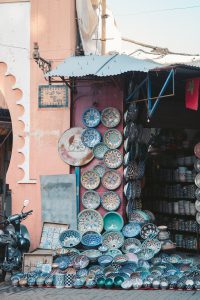 Idrys II, son of the founder of the Idrisid dynasty established at the end of the 8th century, built the still famous town of Fez, which became the capital of ceramics and started to develop culture and science. Fez surprises with the design and quality of its ceramics. The methods of production passed on from father to son are astonishing in the present day, enthralling with the palette of different shades of blue, created on the basis of the cobalt oxide produced here.

The most important production centres are the aforementioned Fez and the famous metal-encrusted ceramics Safi. In addition to the metal applied to the ceramics, Safi products differ from those of Fez also in colour. The Fez ceramics are mainly cobalt and white, while the Safi faience is characterised by a variety of colours. In both cases, you can see Moorish and Spanish colours. 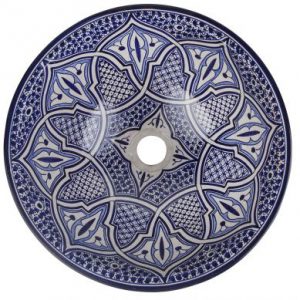 Moroccan ceramics and its design

The Moroccan tribes, and especially those in the north, are replicating the design that was applied two hundred and three hundred years earlier, as the excavations indicate.

The Arab influences fully show the colours of the desert, yellows, oranges, reds and colours of the sky, all shades of blue. The patterns placed on the ceramics symbolize floristry, are symmetrical and even have perfect accuracy. It may be surprising that this method of production has survived hundreds of years and is mostly the result of handicraft. The balance of male motifs symbolising symmetrical, geometric patterns with female motifs symbolising flowers and leaves – arabesque – is visible in the design. The colours and design are beautifully shown on hand-made washbasins. 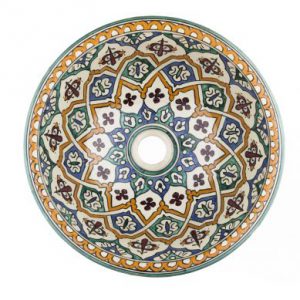 The production of Moroccan ceramics is a tedious and labour-intensive process and can be divided into several stages:

1. Acquisition of clay
The craftsmen owe their production to the red clay obtained, containing powdered pieces of rock. Minerals and rocks are shredded to dust and this is how powdered clay is created.

2. Klinking
It is a process of mixing powdered clay with water feet. This way of mixing the clay allows to get rid of air bubbles from the material and to bind it.

3. Form
On the potter’s wheel the craftsman gives the soul to a piece of clay, which turns into a perfect geometric creation. In fact, this activity will allow to obtain incredible quality and perfect form.

4. Firing
After forming the shape of the object, the clay dries for a few days and is then fired at the right temperature in the oven.

5. Glazing
Glazing consists in covering the manufactured object with a mixture of glass, clay and dye, in a way that allows to achieve the effect expected by the artist.

6. Decoration
It is a process of applying complicated patterns by hand by a craftsman.

7. Final firing
It is an activity which gives the final look and characteristics of the produced ceramics.