Nowadays in Mexico we can distinguish three main centres that are engaged in the noble art of clay firing and that maintain the artisanal mystery and venerable tradition. Topographically these are Izúcar de Matamoros and Acatlán in Puebla and Metepec in the State of Mexico. Only they specialise in polychrome clay (that is, painted clay; on which different colours are applied) and the whole phenomenon is called Barro Policromado ceramics.

Each Barro Policromado product is a handicraft, that is to say, it is original, unique, inaccessible, made on a unique scale, unique and quintessentially individual. It requires manual skills, intricate precision, patience, unrestrained imagination and creativity, as well as artistic inclinations. After all, crafted ceramic products are to be, above all, a feast for the senses, an aesthetic testimony of sensitivity and sophistication of the creator's skills.

Although the name keramos (meaning "earth" or "clay") originates from Greece, the most exquisite ceramic products can be found today mainly in Mexico. 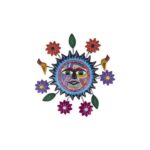 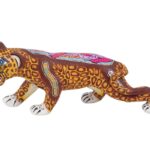 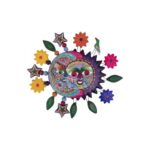 The history of Izúcar de Matamoros perfectly reflects the growing importance and value of Barro Policromado ceramics. The village is located in a fertile valley in the southeastern part of the state of Puebla.

Before the arrival of the Spaniards, the town was called Itzoacan, which meant place of flints in Nahuatl (a language of the Uto-Aztecan group). It was inhabited by the Mistecas (an Indian people, indigenous to Mexico), subject and subordinate to the Aztecs. Hence the customary name Izúcar: the door of the Mistecas. Already at that time, the ceramics created had a reputation and a precursor value, known throughout the country. The arrival of the Spaniards around 1521 only enhanced this value and splendour, enriched it: the Iberian influence introduced new motifs, spaces, unconventional symbolism, confounded meanings, shifted accents, defined a different mosaic.

Assimilation undoubtedly had religious connotations and foundations. The Dominicans responsible for the evangelisation of the city had already founded a small church in 1528, and later, in 1552, Father Juan de la Cruz began the construction of the monastery of San Domingo de Guzman. The next stage in the development of religious life was the foundation of the religious confraternity of the Blessed Sacrament in 1652. Any sacred initiative naturally represented a demand for liturgical instruments and devotional items such as candlesticks, censers, candelabra, etc. Already at this point we can see the pragmatic consequences of the demand and, as it were, the externally imposed conditions that have to be met.

Date added: 28 October 2021
Author: Julietta Torbus
Receive notifications about new posts
Comment on the article
Enter your e-mail address and click "Sign Up".
Remember that you can unsubscribe from notifications at any time.