Tree of life and other products

Izúcar is probably best known for its trees of life (a symbol of fertility and the abundant harvest with which newlyweds used to be gifted), which are painted in cheerful, enthusiastic, pastel colours and covered with fruit, birds and biblical stories, usually Adam and Eve. At its most dogmatic, even orthodox, level, this is a key feature, immanent as it were - for a work to be considered a tree of life, it must obligatorily contain images of Adam and Eve and the serpent signifying sin. Two other cities, Metepec and Acatlan, also have Mexican trees of life, but in a different style.

Izúcar is the only place in Mexico where one can find elaborately and meticulously painted clay products - candelabras, skulls covered with butterflies, boats or many other shapes. This style was popularised and propagated by Alfonso Castillo.

The ceramic craft tradition itself dates back to the mid-18th century. It has been handed down from generation to generation, it has the character of a legacy or inheritance - both nowadays and in the past, it has been carried out by whole families; people related by blood or marriage.

Originally, handicraft was a kind of cultural carrier, a means of communication: the symbolism, motifs or themes were taken from folk or regional traditions. Here we can speak of a folkloristic, even rustic topos.

In modern times, ceramic art undoubtedly flourished, the most outstanding representatives of which were Aurelio Flores (considered a mentor, a prominent figure, a kind of architect of Barro Policromado of Izúcar) and the above-mentioned Alfonso Castillo (unanimously considered the most outstanding artist, who made the region of Matamoros famous with his handicrafts). 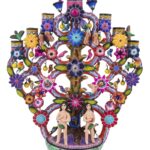 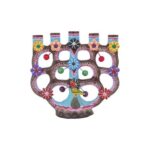 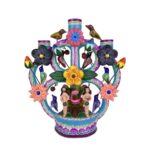 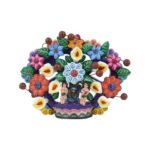 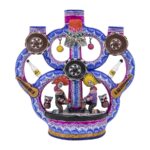 The process of creating a ceramic work

The concept of the creation is either the responsibility of the artist himself, or it is proposed, suggested by the client/recipient/gift recipient.

The clay lumps are meticulously collected and then completely crushed (e.g. with a hammer) to take the form of loose powder. This is sifted through a special, dedicated sieve. The powdered clay is systematically combined and mixed with previously sieved mud. This specific mixture is formed by kneading into a ball, which resembles the consistency of dough. To prevent it from drying out, it is covered with a damp cloth. At this stage it is ready to be sculpted or crafted. Larger pieces can be prepared with the help of a mould, precise decorations are the work of human hands.

The formality of drying lasts from a few hours to even a few days, depending on the size of the product. The firing stage usually takes 6 hours at 800-850°C. Passive cooling, on the other hand, is another 16 hours. Then the piece undergoes polishing (smoothing of the surface). The last part is the final decoration and coating of ceramics with acrylic paints and varnish, which prevents fading, fading and natural colour loss.

Although in the times of merciless capitalism there is a shift of emphasis towards the commercial or factory character of all human creations, the allure and charm of Mexican ceramics by Barro Policromado does not fade away. On the contrary: interest in and admiration for the phenomenon of unique and original clay products are being fuelled as never before.

Find out more about the fascinating Barro Policromado and sign up for our newsletter!

Date added: 2 November 2021
Author: Julietta Torbus
Receive notifications about new posts
Comment on the article
Enter your e-mail address and click "Sign Up".
Remember that you can unsubscribe from notifications at any time.