The colours of Mexico - tequila

The ability to produce cheerful drinks has been mastered since they began to lead a settled lifestyle. Archaeological research shows that about 10 000 years ago our ancestors began to ferment the grain from which they produced alcohol. According to Professor Robert Dudley of the University of California at Berkeley, the propensity to smell ethanol was developed in people through evolution. The very smell of this compound evoked a feeling of pleasure.

From what we have at hand

It turned out that under any latitude you can find a plant from which you can produce a drink that provides easy access to the source of pleasure. In a region inhabited by Indians, such a plant was agave. The Mexican ancestors enjoyed the fermented juice of this plant. It was called pulque. The taste and alcohol content was more like white wine.

The Aztec rulers, however, aware of the dangers of misuse of this beverage, banned its consumption. Drinking was punishable by the death penalty, and sometimes it was exchanged for public flogging. Only people over the age of sixty had the right to consume alcohol without restriction.

The attitude of the Indians to drinking has only changed with the arrival of the Spanish invaders. The Spanish brought the distillation technique to America. Thanks to this technique, it was possible to produce a high percentage of liquor, which proved to be an important tool to support the colonization of new lands.

The first factory for alcohol produced from agave was opened in 1600 near the town of Tequila. At that time it was still called mezcal and was produced from many different types of agave. It was not until the end of the 19th century that its name was changed to tequila. Today, this type of alcohol can only be produced in the province of Jalisco, where the village of Tequila lies.

A beverage straight from the heart

Currently, only tequilana weber azul agave can be used to make tequila. This plant has a characteristic blue colour. It takes seven to twelve years from planting to harvest agave. Once the plant is ripe, i.e. contains about 25 percent sugar, the leaves are cut to reach the heart of the plant, the so-called pina. It resembles a large cone or pineapple and can weigh up to 100 kg.

From about 7 kilograms of pina, you get one litre of high percentage liquor. After cutting off the heart, it is pre-cooked and then baked in special pits or ovens. Once they have cooled down, they are crushed and shredded to squeeze as much juice as possible. This, together with the addition of yeast, is poured into steel or wooden vats and fermented. After a week, a 5-7% drink is made, similar to Aztec pulque. Now a two-stage distillation begins, resulting in nearly 35-55 % alcohol. The pre-distilled alcohol undergoes ripening. Depending on the process, tequila oro (gold) or blanco silver is produced.

There is an opinion among consumers that tequila is an alcohol that does not feel like a hangover. The old Mexicans confirm this circulating truth, on one condition. The drink must be made exclusively from agave. Therefore, you should buy tequila in bottles marked "100% agave" and "Hecho en Mexico".

To appreciate the taste and aroma of tequila, drink it in small sips from a high narrow glass. Consuming this remarkable beverage in a single draught with salt licking and lime squeezing makes Mexico pity smile. 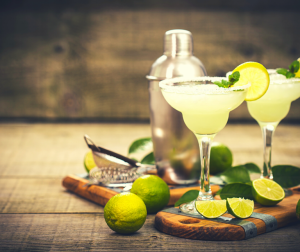 Tequila has made a worldwide career as an important ingredient in ice-cold coloured drinks. The best known are these:

Date added: 19 November 2020
Author: Julietta Torbus
Receive notifications about new posts
Comment on the article
Enter your e-mail address and click "Sign Up".
Remember that you can unsubscribe from notifications at any time.