Ceramic products under the general name of Talavera are products from the town of San Pablo del Monte. It is specified that the first Talavera articles started to be produced in Mexico in the 16th century. The name itself comes from the Spanish town of Talavera de la Reina, where it started to produce this type of faience. With the conquest of Mexico by Spaniards, craftsmen came to the conquered territory, who transferred the style and way of producing ceramics from the continent, so that many Andalusian and Arabic influences can be seen in the colors and design. 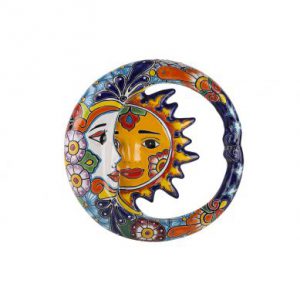 Talaver's ceramics are characterized by a milky white clay. Pots and other rounded dishes are produced using a potter's wheel. In the case of decorative products with shapes other than cylindrical, the material is shaped by a craftsman. All Talavera products are hand painted with natural pigments. It is worth mentioning that the original Talavera faience is made in certified ceramic factories. Each original Talavera product should be marked with the craftsman's signature, logo and hologram. Such products are very expensive because their quantity is controlled and limited by the Mexican Talavera Regulatory Board.

Initially, the basic color that was painted Talavera ceramics was blue and its shades. However, due to the price of the dye, green, yellow, violet and black began to be used, and later oranges and reds. 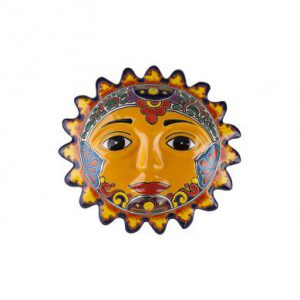 Pablo is famous for its decorative elements, Mexicans love figurines, mugs, plates with beautiful, colourful patterns. They are often very popular, taken from Mayan and Aztec culture, sun and moon-shaped products. Pots and mugs with a characteristic Talaver pattern are popular.

The dye applied to Talavera ceramics is very dense, which after the glazing process allows for a 3D effect, and the use of appropriate light can deepen this effect and saturate the colour additionally.

At the beginning of the 20th century, the collection of Talavera ceramics began. Due to the fact that the quantity of original Talavera products produced is limited in a controlled way, the prices of collector's ceramics can be very high. 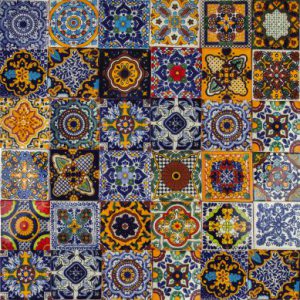 These are small works of art, especially patchworks. These types of tiles were often decorated with patterns symbolizing flowers or animals. As they are produced by hand, they are not identical, which gives them an original, individual style.

Single-coloured tiles are very popular. The most common colours of Talavera tiles are blue, yellow, orange and green.

Where to use Telavera ceramics

Wherever the designer wants to give the room an individual, oriental style. Such ceramics are perfect for rustic and industrial spaces. Tiles with rich decorations can decorate the surroundings of mirrors, doors and windows. They harmonize perfectly with the fireplace. Elements of Talaver's small architecture will certainly emphasize the style of the space and emphasize the atmosphere.

Date added: 13 August 2020
Author: Julietta Torbus
Receive notifications about new posts
Comment on the article
Enter your e-mail address and click "Sign Up".
Remember that you can unsubscribe from notifications at any time.