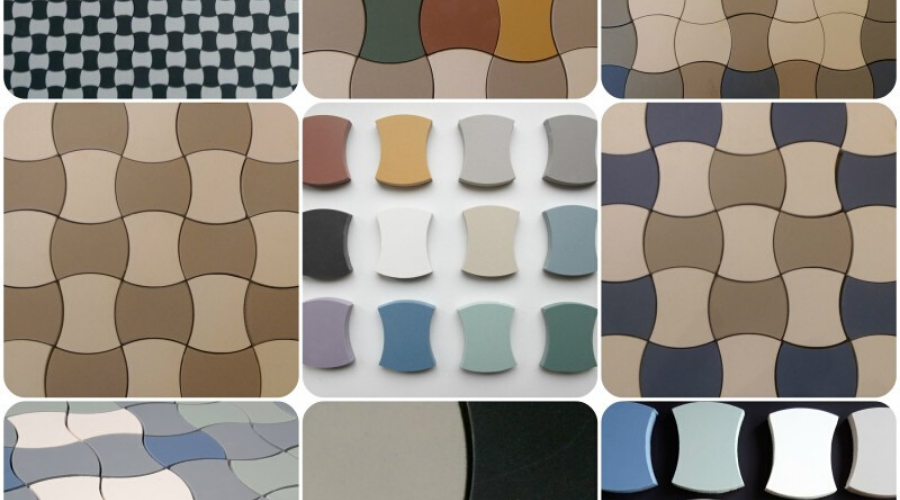 Hourglass tiles were made at the turn of the 19th and 20th century. Chronicles speak of the Netherlands as a country that initiated the production and decoration of floors with these very characteristic flees. The tiles are distinguished by their „waist,” thanks to which it is possible to arrange the tiles in a very orderly, symmetrical way. The corset tiles come from the end of the functionalism era, i.e. the times when aesthetics, the way they were made, the price, were of secondary importance, while the most important was the function that the object was to fulfil. With time, the tiles became a very aesthetic form of interior decoration, which did not prevent their functionality. 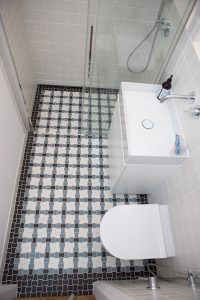 Flyses in this shape were used mainly for applications in passageways, utility spaces and everywhere where there was a lot of pedestrian traffic. It was associated with very high resistance of the tiles to abrasion and weight, as well as easy to keep clean. Over time, as designers noticed the possibilities offered by corsets, tiles have become fashionable and widely used, especially in the interwar period. Apart from Western European cities in Poland, Warsaw, Gdynia and Stalowa Wola are cities where hourglass tiles are quite common in architecture.

Both in Gdynia and in Warsaw’s „Old Ochota” or „Upper Mokotów”, you can find tenement houses whose staircase, apart from the large two-winged entrance door to the apartment, is characterized by corset tiles laid on the floor. The symmetry is often marked by a contrast in the form of adjacent stripes in black and white.

Apart from tenement houses, floors with this type of finishing can be found in old shops, cafés, restaurants. However, the war and changes in fashion in architecture have significantly impoverished interiors with this element of decoration.

Nowadays, where the use of Vintage elements is becoming very popular, people interested in art and open to creation are discovering corset tiles anew. The repeatability of shape, which is certainly helpful in the application of the tiles and the choice of colours, allows for projects that are not very complicated, kept in the right tone, as well as for a more complicated form consisting in the arrangement of a mosaic.

Corsets is not only a usable space, designers moving in modernist forms are able to compose an ascetic surface of the bathroom floor with a suitable shower cubicle or bath. What is important here is the selection of each element, such as a mirror and sanitary fittings.

Hourglass tiles are perfect for the patio, terrace, balcony. They are used wherever the investor wants to obtain a simple orderly, symmetrical form.

In the Cerames shop hourglass tiles are available in 12 colours. This allows for design for the most demanding customers. It is possible to select tiles in such a way as to create even a complicated design, allowing for custom finishing of a room or space outside.

A very important piece of information is that the Cerames store provides a „corset placement simulator” completely free of charge so that you can become a designer and give vent to your fantasies.